A question mark is a punctuation symbol used at the end of a sentence to indicate uncertainty. The question mark symbol is shown in the picture below.

According to Happeh Theory, that specific symbol was chosen because that shape instills a feeling of uncertainty in any human being, when they see it in the head of another human being.

Why or how is it possible that one human being could see the shape of a question mark in the head of another human being? The head of a human being has an irregular, mostly elliptical shape as shown in the next picture.

The following picture shows the entire human body with a low detail representation of the two patterns in question superimposed on it.

The next picture shows a close up view of the head with a detailed view of the route of each of the two patterns superimposed on it.

Each pattern begins at the base of the neck and travels over to the opposite side of the neck,

then up to the base of the skull on the opposite side of the head,

Each pattern then travels all the way up their respective side of the head,

and then crosses over the top of the head to the opposite side of the head.

where each pattern curves all the way under their respective eye towards the inside of the eye,

and up into the inner corner of that eye.

If the part of each pattern under the eye is removed,

the red pattern looks like a question mark symbol

and the blue pattern looks like a question mark symbol.

In a normal and healthy human head those two patterns should be balanced. The symmetry of the two balanced question mark patterns would give the head and face a “complete” or balanced appearance.

Those patterns can change size. If the red pattern shrank until it was very small in some example head,

that head would give the impression the example human beings face was shaped like the blue question mark.

If the blue pattern shrank until it was very small in some example head,

that head would give the impression the face of the example human being was shaped like the red question mark.

If an observer were to look at a human being whose head and face gave the impression they were shaped like either the red or the blue question mark, 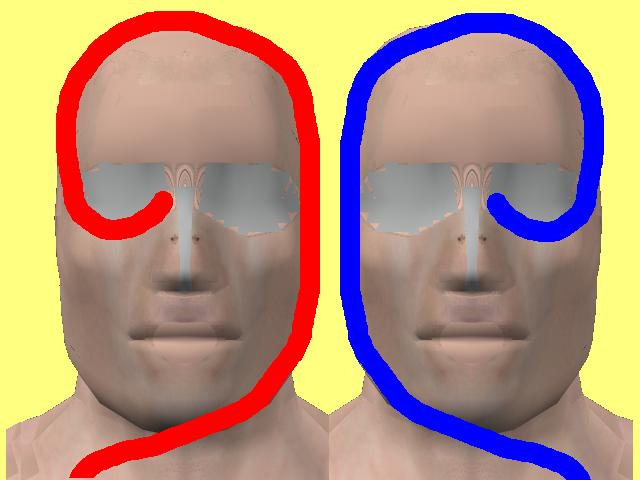 what would they would think?

The observer would be confused and uncertain as to where the other half of that human beings head and face were.